Angels Sent Before Us

Recently I was loading laundry into the washing machine and as I closed the door a word from the Lord struck me profoundly. These words pierced me like an arrow and sent chills through my body, “I am about to unleash my glory in ways that you’ve never seen. Are you ready?“ I knew this was the Lord speaking to me and telling me again to prepare the way, prepare my schedule, prepare my heart, and prepare the church for the days ahead. This revelation triggered another word from God that I heard recently through Tim sheets. Tim is the brother of Dutch sheets and the hand of the Lord is truly upon these men of God in this hour. Recently Tim, who has had several angelic visitations throughout his life, stated that he has seen and experienced more angelic activity in the last several months than he has experienced in the past many years of his life. Tim went on to share that the Holy Spirit has revealed to him that God is activating and sending forth His angels in greater number to those who are engaging in the harvest. He explained that the harvest is greater than we can imagine, the workers are few, and the Lord of the harvest has sent forth angels to assist the workers as they bring in the harvest. when I heard Tim speak these words I became weak and almost fell to my knees. This made so much sense to me.

I have never been visited by Angels until recently. Throughout the past 35 years of passionately following Jesus I have had numbers of people come to me and tell me that they saw angels all around me or a massive angel behind me and with me. People have told me that they’ve seen angels in our worship centers from time to time. Yet, I had never personally had an angelic encounter. My little brother Teddy even had an angel visit him days before he went to heaven. However, since October 8, 2021 I have been visited by angels in my dreams. These angels bring urgent, prophetic messages to me concerning the harvest. The message is clear: “the harvest is bigger than you can imagine and the workers are few” and “it’s time to hit the streets and fill these seats.” God has given me dreams and visions about this.

The Lord has given me visions of myself, gently holding the faces of strangers in my hands, looking them in the eyes, and with the love of Jesus, speaking into them the words He gives me. This particular vision has been repeated to me multiple times over the past several weeks. There have been times that I have gone to Todd and our kids and shared these visions with them through tears.

Over the past 3 weeks I have lived these visions out in reality. This past weekend is the story I will share today. Zach Sheehan had planned to lead evangelism teams to a certain area/neighborhood not far from Central Campus. However, as time passed he sensed the Lord redirecting us to a different area of town. This area is one of the roughest neighborhoods in our city, with a high level of gang and criminal activity. Zach sensed very strongly that the Lord was redirecting us to that neighborhood. We prayed, and the Lord of the harvest sent forth angels ahead of us into the field. God had prepared the way and set up many divine appointments. Open doors and open hearts are the best way to describe it. We marched through the streets block by block singing God’s praises and decreeing His name over the precious lives and households.

There were many amazing testimonies from the day but the one I’m going to share with you now is extraordinary. One member of the team came to me and told me that he felt I needed to go talk to a woman who was crying. I walked up to her house where she was standing outside of her home, barefoot, head down and tears running down her cheeks. This precious woman shared that she was very alone, overcome with depression, discouragement, feeling hopeless and helpless. When we knocked on her door she feared that it would be her landlord coming to evict her because she couldn’t pay her rent. I asked her if I could hug her and she fell into my arms weeping I was then able to look her in the eyes and tell her everything the Lord had told me showed me in the vision to speak to her. She continued to weep as I shared God’s message with her: “We are here today because God loves you. God sent us to your house today because He loves you”. The tears continued to flow as I went on, “Jesus loves you. Jesus forgives you. You are not alone.“ She conveyed over and over to us how she just couldn’t believe that we came to her door when she was alone, broken and hopeless. The team surrounded her with love, hugs, prayers and encouragement.

Sunday morning she came to church. I sat down next to her and put my arms around her. She listened intently to the message and when Pastor Todd gave the invitation at the end of the service her hand shot straight up and did not go down until she had committed her life to the Lord Jesus Christ! Hell lost another one Trista is now free! 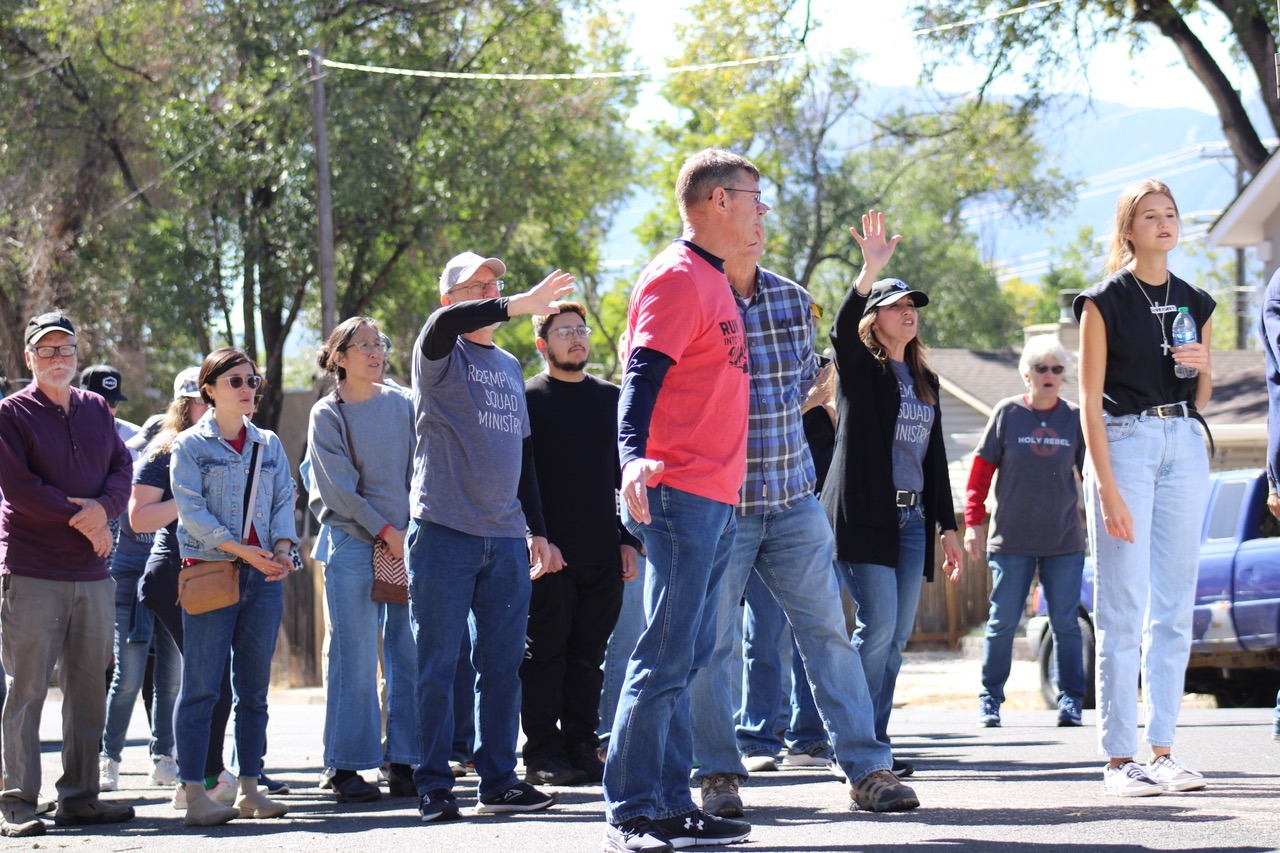 END_OF_DOCUMENT_TOKEN_TO_BE_REPLACED

Followers of Christ in Colorado Springs Must Oppose Question 300

END_OF_DOCUMENT_TOKEN_TO_BE_REPLACED

BIBLICAL CITIZENSHIP    President Ronald Reagan spoke this powerful timeless truth: “Freedom is never more than one generation away from extinction. We didn't pass it to our children in the bloodstream. It must be fought for, protected, and handed on for...