The miracles of what God did in the tent are nothing less than extraordinary. We continue to praise God for all He’s done, all He’s doing, and all He’s going to do. It’s not over. He’s just getting started. One of the biggest miracles is what the Lord did on Monday night in the tent when He miraculously healed a young woman named Bri. I will never forget that miracle in spite of the fact that I had to leave the tent in the middle of what God was doing. It was Monday night, the second night of the tent crusade. Notably, this was the crusade that I had prayed a year and a half for. Our church family had prayed together and prepared for over a year for what God would do in and through the tent crusade. Yet on the second day of the crusade, our son Luke had a very unfortunate accident that landed him in the hospital. Todd had told me to go to the tent and that he would sit with Luke at the hospital. I was torn, but I went to the tent.

The Holy Spirit directed Mario to call out a particular young woman from the crowd that night. This precious woman looked very weak, frail, and seemed to struggle to come forward. God began to give Mario supernatural knowledge and insight into what He was doing in this dear woman’s life. God very visibly touched her, and it was amazing and glorious to watch what God was doing in her. Pastor Todd texted me at that moment, telling me that the doctor was talking about possibly needing to do surgery on Luke and that I needed to come to the hospital. My heart sunk, and I knew I needed to be with our son, so I got up and made my way out of the tent. I very slowly passed by the woman whom God was dramatically touching. I walked outside of the tent and looked up into the sky, and said, “Lord, this is not right that I am having to leave the tent and miss the miracle you are doing in this young woman’s life.“ Then I got into my car and headed to the hospital.

We were there for the rest of the night, and we were given two options for our son Luke who had shattered his tibia. The doctor said we could do surgery, or they could cast his leg from the top of his thigh down to his toes and hope that the bones would reset. Todd and I immediately responded that we wanted them to cast his leg, and we would trust Jesus to heal the shattered tibia. We arrived back home around 12:30 Tuesday morning. The Holy Spirit clearly conveyed this message: the battle is real, and many times the battle we are in is like a game of chess. Satan makes his move that can seem so defeating. Yet God makes his countermove, and God always wins.

Two days later, on Wednesday, I went to Costco to buy groceries. I was driving back on I-25 and was planning to go straight home, taking I-25 all the way to Interquest Parkway. Yet when I came to the Woodmen exit, I felt an unusually strong compulsion to take the Woodman exit. It made no sense, and I struggled to think of a reason to take the exit. Yet I knew I had to take the Woodman exit for some strange reason. I exited onto Woodman and then headed north on Academy, still trying to figure out why I had to take this route. I told my mother-in-law that I was going to stop at Natural Grocers and get some gluten-free bagels. There was honestly no reason to stop there, and we did not need bagels, but for some reason, I felt compelled to go there. We walked in, grabbed our bagels, and headed straight to the cash register. While checking out, I was still puzzled by the fact that I was there. I thought to myself, “maybe there’s someone here that needs to come to the tent tonight.” I began to hand out invitations to the tent. As I handed an invitation to the woman who was checking my groceries and the woman behind me in line…a woman in another aisle looked over to where I was standing and shouted out, “I went to the tent Monday night and Tuesday night, and I’m going again tonight!“ Then she said, “I’m joining that church!“. I replied to her, “Hallelujah!“ then I said, “my husband and I are the lead pastors there.” She stepped out of the aisle she was in and came over into the aisle where I was, and we had church! She began to tell me (and everyone else in that part of the store) how God healed her in the tent. As she described what happened to her on Monday, I realized this was the young woman I had to walk around to leave the tent Monday night. I remembered well how I looked up to the sky and told God, “Lord, this is not right that I am having to leave the tent and miss the miracle you are doing in this young woman’s life.” This was that woman! She teared up as she explained that she had been chronically ill for six years. Her brother Michael was with her, and he emphatically nodded in agreement, affirming everything she was telling me. He confirmed that she had been very sick for several years, and she was even bedridden for much of that time. She went on to explain that she came into the tent very frail and weak, but the Lord miraculously healed her! Then she told me emphatically that the biggest miracle was not that God healed her physically but that she was now a daughter of God. Tears were now welling up in my eyes as she excitedly shared how now she knows the love of God, and that is the greatest miracle of all. As we rejoiced and celebrated her healing and new life through Christ, she told me that even with all God had done that morning. She began to battle thoughts in her mind about whether what she experienced was real. So I was able to share with her that the enemy comes to steal, kill, and destroy and that we have to resist the enemy’s lies and continue to walk in God’s truth. We marveled at how that morning she was struggling, and God directed me supernaturally and sovereignly to get to the grocery store where she and her brother were at the exact time they were there. Without a doubt, God was the one who sent me to Natural Grocers that day for bagels that I did not need so that I could be connected with the woman who got healed Monday night when I had to leave the tent to go; to the hospital! Only God could’ve made sure that I was there at the exact same time and in the exact same place so that I could encourage her to resist the enemy’s lies and keep pressing into the God Who loves her, healed her, and set her free!

A few days ago, Bri went back to the doctor. Her doctor examined her and had no explanation for what he called a “spontaneous remission.” The doctor told her that her case would be written up in textbooks as spontaneous remission. To which she replied, “I don’t know what they call it, but I call it a miracle from God!“ To God be the glory! It’s not over. He’s just getting started! 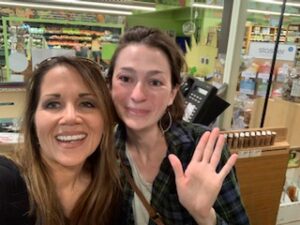 END_OF_DOCUMENT_TOKEN_TO_BE_REPLACED

They Raided All Our Homes

They raided all our homes  This week, Pastor Todd and I felt compelled to share the latest blog post from Evangelist Mario Murillo. Radiant Church, America is under siege, and we must pray now. Please click the link below to read Mario's take on the shocking...

END_OF_DOCUMENT_TOKEN_TO_BE_REPLACED

Better Together  Remember the banana? When it left the bunch…it got skinned. God created us for community. We all need each other. We have a real enemy, and one of the strategies of hell is to divide and conquer. Hell knows that separation and isolation are...